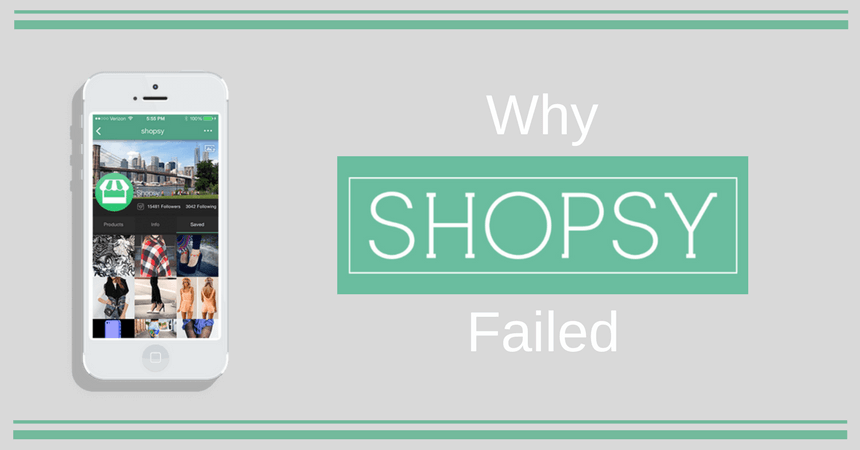 Why Shopsy Failed: A startup autopsy

We were one of the first to allow for Purchasing Products on Instagram… had $200k investment from early Facebook employees and had brands like Lilly Pulitzer, Kate Spade, Sephora, Lorna Jane, Tieks, Jack Rogers, Lululemon, Tobi, Alex & Chloe, BaubleBar, ThreadSence, and Ruche…so what happened?

When brands with millions of followers tell their customer base to “go shop the link on the profile page” it creates a new marketing funnel by consolidating the awareness, the consideration, and the conversion, which in turn dramatically increases conversion rates. Shopsy was a double-sided marketplace where brands could tag their Instagram pictures to link up to the exact web page for a product and then customers could follow and shop each brand. After a year of hard fought product and business development, we finally found our beachhead and it had network effects built-in by creating what can be likened to an “Instagram Landing Page” that mirrored a brands exact Instagram post, where each picture directly linked to the individual product through the one hyperlink that Instagram allowed.

I didn’t want to publish this or think about this in depth again so much that I began writing this post before October 16, 2016, and ended up coming around to editing and sitting with my initial write up finally again towards the middle of 2017.

It began without full transparency and a lack of understanding about how to operate at an early stage, high growth potential company. We lacked a focus since everyone was working other full-time jobs. We were energized and idealistic. Starting off one of the biggest mistakes was outsourcing the development which ended up to causing a lot of issues down the road. Our leadership was constantly in a push-pull tension with too many of the same traits that weren’t complimentary. We needed guidance and humility and perhaps another programmer. We would have benefited from being in an incubator so that we could work together and focus. Building two-sided marketplaces takes serious strategic thinking. I believe there were at least two main factors that contributed to our downfall:

Shopsy went through many ups and downs, after merging with Glowpanda to bring some energy into “shoppable pictures” which it did because of the hustle from our marketing manager and community manager in bringing some leading fashion brands on board. The initial months of development and outreach seemed to be going well until the head of social headed out of town to pursue other interests and then a month later the marketing momentum faded away as the complex two-sided value proposition became difficult to communicate with initial funds dwindling. We were passionate and young. The team admittedly “checked out” after ApplePay rolled out, as a lot of energy was spent on adding the universal cart functionality, a feature that merchants still struggle to wrap their heads around as the fight to own the conversions still wages on (particularly on mobile).

The initial product was built by outside developers to get a working product, so our technical co-founder wasn’t able to easily make updates because of the multiple databases, and various pagination, so the learning here is that if you have a technical product it is better to have someone do the development in-house instead of using bits and pieces from outsourced developers who may not necessarily be tied to the end product.

Managing energy and my intentions

My energy had been substantially drained from the year-long Glowpanda stint where I was trying to live in San Francisco on affiliate marketing revenue (do not attempt this), working with a remote co-founder, and working very hard on explaining this new opportunity to people. At the point where I met the Shopsy co-founders, it felt like I had been running a marathon straight for about two years and I was just fatigued. I worked hard to not only create the concept with my technical co-founder, but to turn it into a reality, and a profitable reality all without any funding, this was hard. Secondarily, I was spending my time on my paying job as the only marketing employee at SeeControl, and Internet of Things software platform that eventually got acquired by Autodesk.

My intentions needed to be different. There was a part of me that didn’t want the venture to be truly successful because I felt that it was my concept and for me and the only technical co-founder to have 10% ownership each was shorting the fact that we not only created the industry but would be the backbone of the product moving forward. My ego corrupted relationships, my work, and my communication and when I felt my control slipping away I tried to hang on to the remaining proprietary knowledge I had by passive-aggressively communicating. I wanted and needed someone else to guide for a while, however, this lead to me becoming more and more aloof when I felt like there was no clear direction.

As things hit rock bottom and we were seldom speaking to each other I kept looking into Google Analytics for a solution to just jump out at me.  I did not know a lot about analyzing data and I never established a clear or accurate KPI. After months of just willing these charts to go anywhere,  sure enough, I eventually found a little blip on the radar,  I discovered that there was a substantial amount of traffic coming from just one of our clients. It was a spike that showed promise. I should have brought this to the attention of everyone on the team, but I didn’t know what it meant, if it was repeatable, if it was monetizable and I didn’t let the data speak for itself. I am in favor of transparency across the organization when it comes to sharing metrics, visions, and direction but I have also learned that there are benefits to keeping certain strategies to within the founder’s circle that help for stability and focus for task-driven team members. To find out that there was traffic could have been the spark we needed to rally around and turn things around, but it was too late and when I went to speak to the other co-founder he was dead set on closing down shop and there was another company that began executing on the same feature.

The search for scalable revenue can be found within the walls of an up and coming application that is a part shop, and part enterprise picture platform. We should have pushed PR big time, but we didn’t. We had an article or two written but it would have been a whole different world had we put out some press. I drafted up a press release “Shopsy Successfully Monetizes Instagram” but never had the chance to publish it and distribute it. The user’s mindset may still be far away from typing in their credit card information to make a purchase before they hop out of their Uber, en-route to work. Social commerce — or the ability to purchase products and services directly through a social media platform is becoming increasingly accepted among today’s consumers but is still not a trusted medium where you would link your payments to pictures. Think about how seemingly logical Google Wallet was and yet, consumers were not able to fully adopt it because of the lack of comfort and trust in the new process. When the brands realize that they are just a couple of clicks away from being merely a manufacturer because Instagram will control the majority of the discovery and education funnel and manipulate where users get targeted, while Facebook with a $355 billion dollar valuation creates the Amazon effect by removing the middle-men.

Some of the companies that I believe Shopsy directly influenced are:

Here is what I would have done differently:

I am grateful to have had the opportunity to learn from this experience and think that it is important to write out the most accurate narrative of what happened so that everyone can move on and adapt in a healthy way. It could have worked had I known what I know now. Of course, there were a lot of different factors that the rest of the team members experienced and played a role in and this post is for me to learn from my personal mistakes and to be able to fully move on and better understand the situation. I do not place blame on anyone from our team and realize that I have been extremely blessed to even be able to go through this personal learning experience and to get the chance to work and share my passions with people. I appreciate everyone’s contributions who worked on this. There is still room for mobile monetization and my technical co-founder and I still have many of the pieces of the puzzle that would work when put into the right situation (think Snapchat monetization). I am happy because it helped spawn a new method to deliver value through social commerce by creating a win-win scenario for both brands and communities and hopefully helped sway the mobile monetization landscape slightly away from display ads and more towards commerce.